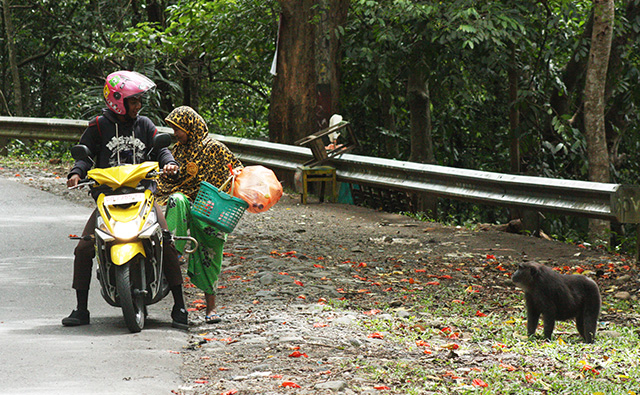 The $330,000 National Science Foundation Build and Broaden grant funds research with assistant professor in Mathematics and Statistics Henry Scharf and SDSU alum Amanda Ellwanger and their students to examine human-primate behavior and develop novel statistical methods to assess that data.

Primatologist Erin Riley’s latest NSF grant goes beyond answering the question, “why did the macaques cross the road?” to determine, “why do they stay?”

Since 2010, Riley, professor of anthropology, and her student teams have been researching ecological and cultural interconnections between humans and primates in Sulawesi, Indonesia, including an area along the main road that bisects the Bantimurung Bulusaraung National Park. The narrow but widely used road has changed the migration patterns of primates in the park, including one group of Moor macaques (Macaca maura) she and students have followed in their six trips to the area.

“They would always come to the road, they would always cross it and then move on,” she said.  “But what we started to notice a few years back was that they started to spend more and more time on the road or nearby the road, which meant that they were then visible to people, and then people started feeding them. That has set up a new type of interface between people and these animals.”

The three-year NSF grant, which dovetails with another NSF grant she received to study primates in the area, will allow Riley’s students (three undergraduate students and two master’s-level graduate students) to work with three of Ellwanger’s students during the summer in Indonesia. Ellwanger, an instructor of anthropology at Georgia State’s Perimeter College, was a student of Riley’s, earning her master's degree in anthropology from SDSU in May 2010 and receiving a President's Award in the 2010 Student Research Symposium.

Starting in 2023, these student teams will study the macaques’ foraging and social behavior along the road, including when the main group splits into subgroups. Their longitudinal data may help determine whether they split into subgroups to get more people food (like cakes and cookies) and whether they seek out more people food when there’s less of their usual diet available (primarily fruit, but also insects and leaves).

They will also conduct ethnographic interviews, including asking people who stop their vehicles along the road why they feed the macaques. “In our preliminary work, a lot of people said the macaque look like they're hungry because they sit there staring at them, so oftentimes there's a sense of compassion,” Riley said.

“The framework that we're using for the primate behavior part is called the landscape of fear, which means (the primates) are always balancing risk and reward across geographic space. We're flipping that on its head with regard to the human component and thinking about how humans contribute to creating this landscape,” Riley said.“And part of that is essentially, their behavior. They're feeding them, they're stopping on the road, maybe even trying to approach the animals, and that could be perceived as threatening behavior.”

Another implication of the feeding at the road is the potential disruption in social learning, especially for younger macaques. “Primates are very social, and so they rely on others to teach them things like where's our favorite fig tree. If there's a lot of time on the road, how are these youngsters going to learn that kind of critical ecological knowledge?”

In years two and three of the study, Scharf’s students in San Diego will start using the data to build statistical models and methods to examine social networks and behavior, which may be used to examine other social networks down the line. “He's a statistician, but he has a lot of experience working with animal data in regard to social networks —, who's connected to whom, and how that then shapes movement,” said Riley.

Another exciting aspect of the project for Riley is that it comes under NSF’s Build and Broaden program to support fundamental research at minority-serving institutions. SDSU is both a Hispanic-Serving Institution and an Asian American Native American Pacific Islander-Serving Institution (AANAPISI). Grant project partner, Perimeter College, js a two-year college that is part of Georgia State University, and is a Predominantly Black Institution.

The chance to partner with a two-year college is also important to Riley because exposing students early to research opportunities increases the likelihood that they will continue research into four-year and graduate schools. “So, if our student recruitment focuses on students from underrepresented groups, we hope to enhance the research capacity of those students.”

“There's something different about the interface between humans and other primates,” she said, including how humans look at primates and think, “’They have families, too,’ or ‘look how they're caring for their young.’ They see themselves in our closest living relatives.”