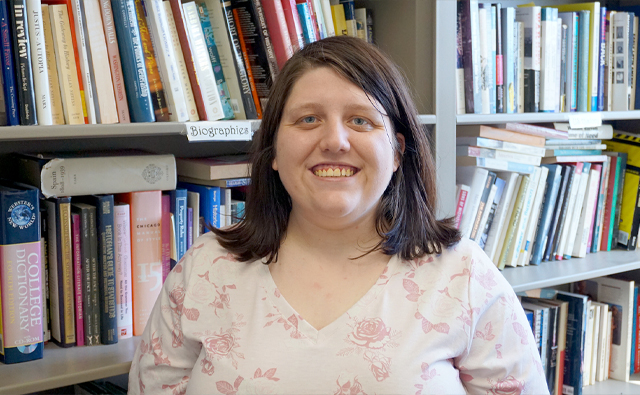 Her research takes a look at how the royal family brand was developed during the reign of Britain’s Queen Victoria — and how that legacy lives on today.

M.A. in history student Taryn Duffy discovered a love of royalty and Victorian Britain during her undergraduate years at the University of Central Missouri.

When she decided to take her research to the next level, she found an academic home at San Diego State University in the history department.

With a specialist of Victorian England on the history department faculty (Edward Beasley), it was the perfect fit for Duffy, and receiving a fellowship added a welcome relief.

Duffy was awarded the Presidential Graduate Research Fellowship (PGRF) in 2021 and again in 2022. The PGRF is a university-wide competition for non-resident graduate students who demonstrate outstanding potential for achievement in research or creative activity. It provides a tuition waiver for one year of a graduate program at SDSU.

During the last two years at SDSU, Duffy has broadened her academic experience to become the president of the Phi Alpha Theta honors society, participated in myriad research symposiums, and joined organizations related to her research and thirst for more knowledge.

“As the president of the Phi Alpha Theta History Honors Society, Taryn Duffy has been indefatigable,” said Walter Penrose, associate professor of history and advisor of the honors society. “She has organized our speaker series, student mixers, and our initiation ceremony. Her dedication to the organization is exemplary, and her leadership skills will take her far beyond the walls of SDSU once she completes her master's degree in history.”

Amid research on the Victorian era, Duffy found a quote in the satirical publication Figaro in London of 1837, which propelled and inspired her to develop her thesis, with a proposed title “‘All the world’s a stage’: Victoria’s Media Performance and the Birth of the Royal Family Brand.”

"If it be true, that ‘all the world’s a stage,’ we suppose that Kings and Queens must be tip top performers; stars engaged at heavy salaries, to play the leading business of this terrestrial hemisphere. Victoria has just come out in the character not only of a leading actress, but a manageress on her own account, and in both characters, she has won the hearty applause of the public. She has long been a favourite in juvenile princesses and walking ladies, but her appearance of Monday last, in the arduous character of the youthful Queen, has established her at once the pinnacle of public admiration."

In her abstract, Duffy writes, “By the nineteenth century, the British monarchy evolved into a political figurehead but preserved its unmatched popular influence over British life. How was this achieved? The answer lies with Queen Victoria, who made herself the first mass-media monarch. Victoria and the media worked alongside one another to craft what is now known as the royal family brand.”

In one quote that Duffy finds amusing from Punch magazine, "Surely, Her Majesty will command [t]he attends to discontinue walking backwards in her presence, as if they were crabs. Being the Queen of a progressive people, she must disapprove of a movement which is simply retrograde." Duffy notes that the media was not slanderous at all in their reporting on Victoria; on the contrary, they were quite protective of her.

“Beginning under Victoria, the royal family is meant to be seen as the pinnacle of respectability and family togetherness,” Duffy writes. “Today, the monarchy serves as a model for its citizens to look to and learn from, or so the brand supposes. It is because of Queen Victoria that people today are so keen to know every little detail about the royals and the media scrambles for every glimpse inside Buckingham Palace. Her reign connected the monarchy to the people, creating a more modern function for an ancient institution.

“Throughout this research, I will examine magazines such as Figaro in London and Punch regarding their views on Queen Victoria and, through it, trace how Victoria molded her public image. I argue that Victoria created a royal brand and her legacy of being in the spotlight lives on today.”

In June, Duffy will spend two weeks in England with her twin sister. She plans to spend hours at the British Library, where she will hunt for more conversations about Victoria et al.  in the British media archives. The visit to England gives Duffy a chance to “breathe it all in” and bolster her research.