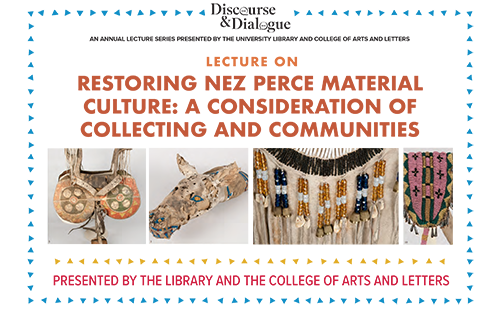 In 1847, Presbyterian missionary Henry Spalding acquired handmade Nez Perce artifacts and sent them from north-central Idaho to his friend and supporter, Dudley Allen, in Ohio in exchange for commodities. This was the fate of many early Native American materials, to be appropriated by non-Natives and removed from the hands and lands that created them. The shirts, dresses, baskets, horse regalia, and more — called the Wetxuuwíitin’ (formerly Spalding-Allen) Collection — would not return to their rightful home until they were purchased by the tribe from the Ohio Historical Society in 1996 for $608,100. On November 23, 2021, the Ohio History Connection (formerly the Ohio Historical Society) returned $608,100 to the Nez Perce Tribe. The reclamation of these Nez Perce artifacts is the subject of a Bond’s book, Coming Home to Nez Perce Country, published by the WSU Press in 2021.

This illustrated presentation and reading will consider the story of the Wetxuuwíitin’ Collection and the fate of other Nez Perce items held in museums and private collections. We will also explore a long-term collaboration between WSU and the Nez Perce Tribe to curate the collection on the Plateau Peoples’ Web Portal.

Trevor James Bond was born in San Diego and graduated from SDSU with a B.A. degree in classics (emphasis in Latin and Greek) and a minor in art history in 1988. Trevor met his future wife, Robin Sparks, in front of the library at SDSU. He received his master's in library and information science with a specialization in archives and preservation management and a master’s in ancient history at UCLA. In 2017, he completed a Ph.D. in public history at Washington State University. He is currently an associate dean in the Libraries and the director of WSU's Center for Arts and Humanities. He also serves as the co-director of the Center for Digital Scholarship and Curation. In addition to his library work and research, Trevor loves playing tennis, skateboarding, baking bread, and discussing fountain pens and rad power bikes.

The lecture series is a partnership between the SDSU Library and College of Arts and Letters.